The GW6400 SBC is a member of the Gateworks 6th generation Newport family of single board computers targeted for rugged and industrial applications requiring up to 5 Ethernet ports or SFP Fiber Optic modules along with 4 Mini-PCIe slots. It suits  a wide range of indoor and outdoor networking applications that depend on a reliable SBC that is made in the USA. The embedded single board computer is excellent for Internet of Things (IoT) applications that require a high performance processor. 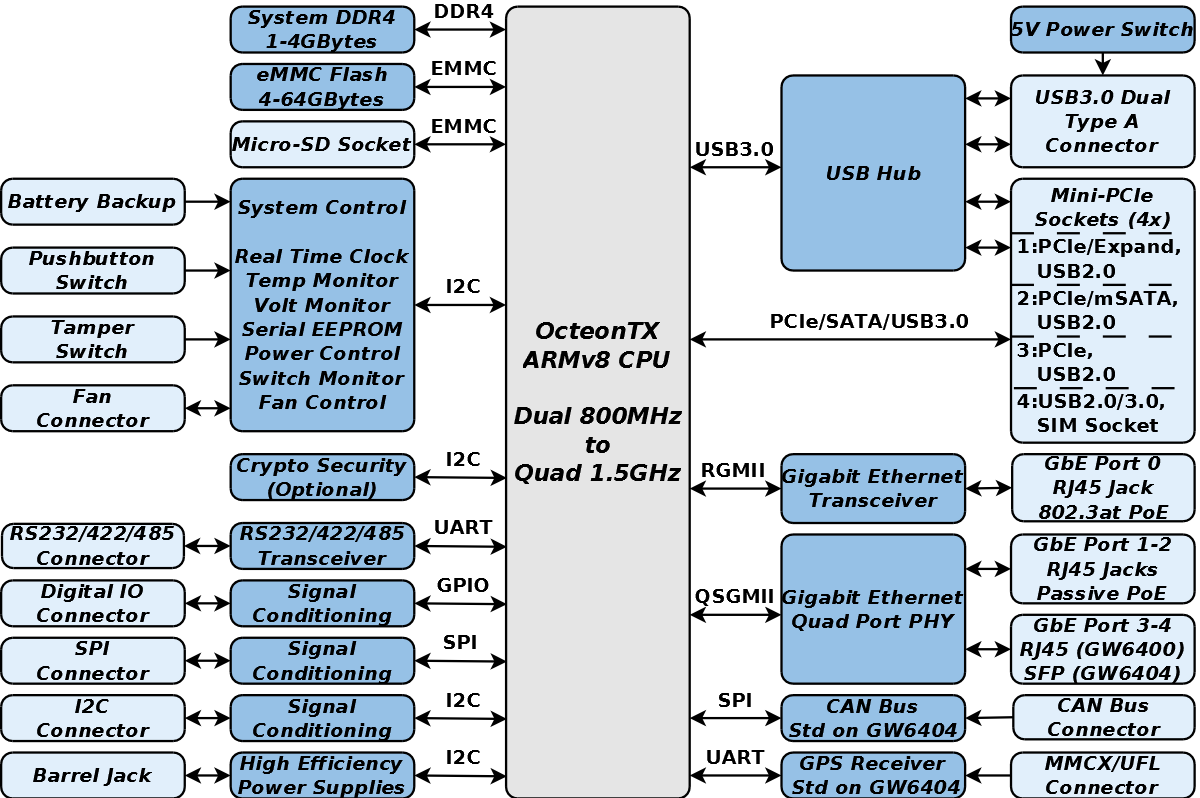 Request Pricing
This standard model is available in any quantity.
Discounts offered on orders of 25/100/1k and higher.
See the "Ordering Options" tab for available configuration options.

To request pricing or discuss configuration options, please send a message to

Also visit the Newport Product Support section of our knowledgebase/wiki

The GW6400 embedded SBC features the Cavium OcteonTX™ ARMv8 SoC processor, up to five Gigabit Ethernet ports, and four Mini-PCIe expansion sockets for supporting 802.11abgn/ac wireless radios, LTE/4G/3G CDMA/GSM cellular modems, mSATA drives and other PCI Express peripherals. A wide-range DC input power supply provides up to 15W to the Mini-PCIe sockets for supporting the latest high-power radios and up to 10W to the USB 2.0/3.0 jacks for powering external devices. Power is applied through a barrel jack or an Ethernet jack with either 802.3at or Passive Power over Ethernet. This single board computer is Made in the USA under strict ISO and AS9100 control. It is designed for operating in rugged and industrial environments, such as a remote IoT Gateway. Several Gateworks Mini-PCIe radios exist to connect to the Internet of Things cloud using the GW6400: the GW16122 Sub-1GHz radio, GW16130 Iridium Satellite Modem and the GW16126 LTE CATM1 Cellular modem. The five Ethernet ports allow the SBC to operate like a switch or router for more demanding edge applications.

GW6400 does not have SFP Ports loaded.

See how our SBCs are being used.

From drones to airliners, utility meters to pipeline monitors, huge mining vehicles to small robots and IoT gateways; our single board computers are used in many different industrial applications that require a rugged and reliable computing platform that is Made in the USA.